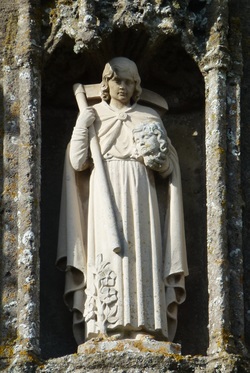 Little is known about the life of St.Hieritha, otherwise known as St.Urith. She is said to have been born in the 7th century at Stowford, not far from Chittlehampton. She may have been a convert of missionaries from Glastonbury who came here in the 6th century. She was reputedly murdered by local haymakers, stirred up by her jealous stepmother. However as her name is of Celtic origin, and due to similarities with the stories of St. Sidwell (Exeter), and St. Juthwara (Dorset), some have suggested she was killed by raiding Saxons from Somerset.

​Where she fell, a stream sprang up, which serves a well, and the water came to be known for its miraculous healing power. In the 16th century there is reference to Chittlehampton as the location of legendary miracles performed by St.Hieritha, and refers to her being buried here. Her depiction with a scythe, and holding her own head, is symbolic of the means of her death.

Pilgrims came in large numbers to gain healing at St Hieritha's well, but in the 1950's North Devon Water Board removed the structure over the well on grounds of safety, and covered the area with concrete. A manhole gives access to the well, which is regularly blessed by the vicar on the saint's day. The village still celebrate St Hieritha's Day on 8th July.
​