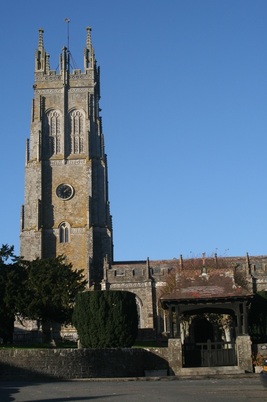 The Church of St Hieritha at Chittlehampton was originally sited at the place of St Hieritha's martyrdom.
The church probably dates from the eighth century but was completely rebuilt between 1470 and 1520. The tower is regarded as the finest in Devon and dominates the village.

The north and south transepts each have a magnificent memorial to a former benefactor. In the north is the Giffard family vault and the south contains the Rolle family vault.

The present church is largely as it was after a major restoration completed in 1872. Among the Victorian enhancements was the reredos, which shows The Last Supper fashioned in mosaic and forming a perfect backdrop to the altar. The kneelers embroidered as a Millenium Project are also well worth viewing.  A modern kitchenette and toilet were added in 2014, making the building a more versatile venue.